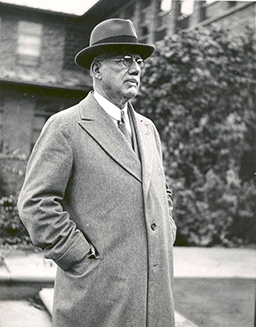 Historically, Cranbrook's Observatory began in 1927, when George G. Booth was developing Cranbrook as a cultural and educational complex. Many people were involved in the project, but Judge Henry Schoolcraft Hulbert was one of the most outstanding.
Judge Hulbert was associated with the courts of Wayne County for 44-years. In 1887, at the age of 18, he built his own telescope and observatory near the present Wayne State University campus, and developed an excellent working knowledge of the sky. 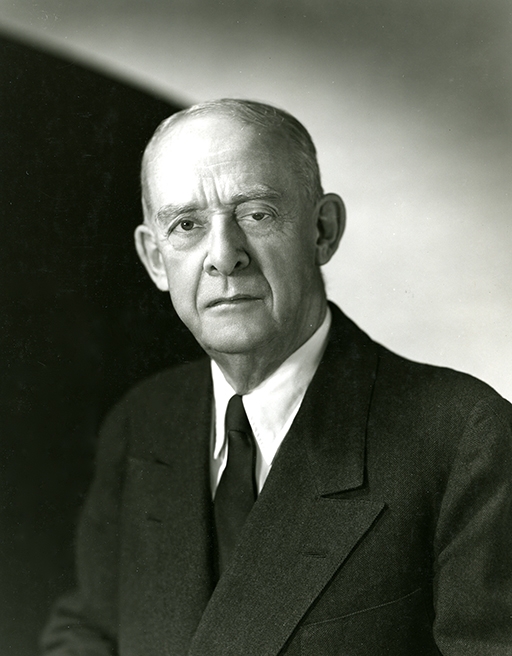 Judge Hulbert was a good friend of Mr. Booth and because of his enthusiasm for learning, became one of the original members of Cranbrook School's Board of Trustees. Hulbert persuaded Booth to include astronomy in the curriculum of the school and donated the use of his three-inch refracting telescope, and Hulbert, after consulting with Dr. Ralph Hamilton Curtiss, director of the University of Michigan Observatory, purchased a six-inch refracting telescope at a cost of $3,585. This instrument was set up in a converted silo on the Cranbrook School campus.
Soon after its installation, however, a major problem became apparent. The telescope's drive mechanism did not operate smoothly. Hulbert mentioned this to his friend Francis McMath, and McMath suggested that his son, Robert, who was also interested in astronomy, might be able to help. Robert McMath took the critical pieces to his shop and shortly had the telescope functioning smoothly.
When the new Saarinen-designed school buildings were completed, included was a unique observatory tower to house the instrument. Soon after it was installed various problems arose. Because the tower was attached to heated buildings below, warm air filled the observatory in winter causing air turbulence and poor viewing conditions. As moisture condensed, ice formed inside the dome. Smoke from nearby chimneys and traffic vibrations on Lone Pine Road added to the problem. Thus, Robert McMath and Judge Hulbert asked Mr. Booth to consider constructing another observatory elsewhere on the grounds. To their surprise Booth produced plans for an observatory incorporating a museum (Cranbrook Institute of Science). McMath was asked to be designer, supervisor and purchasing agent for the envisioned observatory. When the Cranbrook Institute of Science became a reality in 1930, as an institution independent of Cranbrook School, both Hulbert and McMath became trustees and associate curators of astronomy. 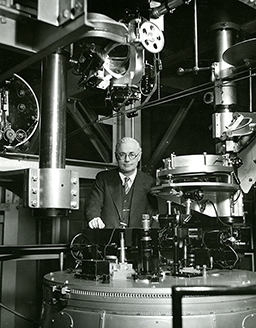 At the same time McMath and his father, with the help of Hulbert, were in the process of constructing their own observatory at Lake Angelus. They wanted to make motion pictures of celestial objects, a feat no other observatory had attempted. In working toward this goal, they discovered that existing clock-drives were not accurate enough for motion pictures, so McMath developed a mechanism which not only facilitated better guidance, but also permitted changes from one drive rate to another. The Lake Angelus observatory was completed in 1936 and produced films of solar phenomena that have been studied around the world. The observatory became part of the University of Michigan but has since been sold. Thus, a McMath drive, identical to the one at Lake Angelus, was installed at Cranbrook Institute of Science.
Planning for the Kitt Peak facility began in 1953 when the National Science Foundation became interested in constructing a national observatory. Robert McMath, then nationally known for his innovations, was asked to head the advisory panel and collect information for the site. He also was asked to design a solar telescope and his revolutionary design incorporated special insulation, cold water pipes for cooling and fire-proof tileboard.
Judge Hulbert and Robert McMath maintained their keen interest in the Institute of Science as trustees for three decades, from its founding until their death in 1959 and 1962.